Star of the North Retreat Centre has launched an online/on-site signature, three-year program – Aurora Living: Word and Creation. Our emphasis is to deepen our relationship with Sacred Word and story from Christian and other wisdom traditions, and renew our relationships with Christ’s Spirit for the good of creation.

This program aims to build an inter-generational, cultural and faith community.  It is inspired by contemporary witnesses who are making a difference in the world.  It empowers contemplative living and stimulates action for contemporary needs and time.

transform us for a radical way of life to become agents of  a new dawn.

This is Aurora Living! 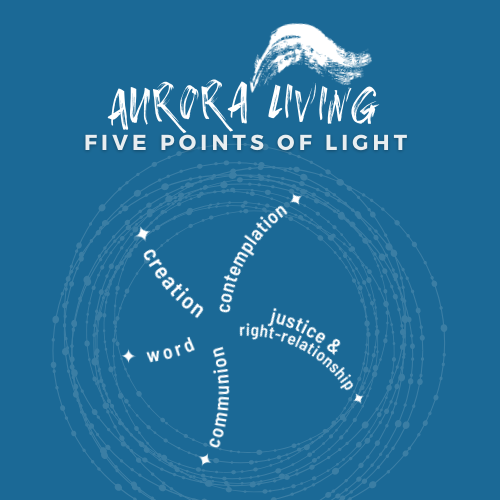 By way of introducing the biblical themes of Aurora Living, Star of the North will be hosting a monthly series of prayer rituals leading up to our October 2021 program launch. REGISTER HERE and join us to learn more about the program! You can find videos of past rituals on our Youtube channel.  Click here to find rituals and more. Star of the North Retreat Centre YouTube Channel

Aurora Living is presented as a complete cycle of nine modules over three years; however, it is possible to attend individual modules of your choice. Each three-month module includes:

Inclusive of everyone, we invite you to consider joining us on this journey of hope and action!

Guided by Laudato Si, sacred teachings and wisdom traditions, Aurora Living aims at learning, integrating and practicing a contemplative way of living in response to the call to love and serve our global family and to care for our common home.

Recognizing as common to all spirituality the longing for depth and communion, our goals are inspired by the universal wisdom contained in the Christian, Indigenous and other faith traditions, as communicated through Scriptures, guiding us to union with God, each other and creation.

“You shall love the Lord your God

with all your heart,

and with all your soul,

and with all your strength,

and wilh all your mind;

and your neighbour as yourself.”

We aim to keep our application process relatively simple, so if you have questions, please don’t hesitate to contact us.

❑ Applicants must demonstrate in their application a desire and openness to personal spiritual growth and a commitment to the learning process through participation in all aspects of our program.

Step 2: Complete Application
NOTE: To download and print these forms, please find the attachments at the bottom of this page.

❑ Complete the online Application Form, including a brief reflection outlining your background and spiritual formation journey; their reason for application to Aurora Living, etc. as outlined.

Please contact a spiritual and/or professional reference (i.e. mentor, spiritual director, employer, pastor, priest, etc.) who can provide a brief, online character reference on your behalf. We will send you the reference link as part of the application process.

Program registrants will be notified of payment options/plans within two weeks upon acceptance of their application.

We want to ensure access to funds for people in need of assistance to cover the cost of these modules. Please note bursary applications are available upon request for those in need.

Room upgrades available at additional cost. Please contact us for pricing and availability.

The headlines about the unmarked graves are justifiably shocking and put the spotlight on the colonialism practiced by Canada since its inception.

All the abuse that the Residential School system entailed and the atrocities committed are historical facts that make us ashamed, redden our faces and cause us immeasurable pain. We would like not to have to look at this reality, but the first step on any positive path is to choose to know, to listen, to name bluntly what happened and the damage it caused. As Pope Francis rightly says in Fratelli Tutti no. 249: "We can never move forward without remembering the past; we do not progress without an honest and unclouded memory.”

On a human level we can understand the anger that the facts that come to light provoke. However, the burning of churches that are taking place serves only to feed a resentment that sickens the personal and collective soul.

What we cannot do is miss the opportunity to reflect and learn what we need to learn.

Lucie Leduc, Executive Director of the Star of the North Retreat House where I work, in the face of the pain caused by the burning of the century-old church where she and her family celebrated all the sacraments, from baptisms to weddings, shared a deep reflection: "This pain I feel leads me to think of what the Indigenous peoples must have suffered when they were forbidden to speak their language, have their celebrations, celebrate their religious rites, when their culture was denied, ’burned’".

We will have learned something if we are able to put ourselves in the place of others, to feel their pain, to be ashamed of the fact that we, as a Church, were complicit in a flawed system, and if we make a journey of conversion that purifies us and strips us of everything we need to be stripped of.

If we look at Jesus, he was born in simplicity, in poverty; there he grew up and there he acquired all his wisdom, observing and learning from the life of the women and men with whom he lived, recognizing God in everything, in nature, in daily gestures, in himself.

His entire public life was spent in precariousness, being itinerant, without any power. He was characterized by mercy, compassion, and a heart moved by the pain of others. His earthly life ended up on the cross, stripped of all dignity and power.

As Leonardo Boff says, it is not enough just to be good people (feeling as such comes to a great extent from knowing that we are in tune with the dominant system of the moment); what God wants and Jesus showed us, is mercy, compassion.

This is an opportunity for purification, to live compassion, to let our hearts be moved by the pain of others. It will be listening to the pain of the Indigenous peoples that will purify us.

Regret for the pain caused ought to lead inescapably to a commitment to reparation, to the maximum extent that we can.

And the best thing that can happen to us is that those to whom we have caused so much pain, offer us their welcome, their forgiveness. There is no greater blessing we can receive.

Fratelli Tutti wisely writes in n. 251: “Those who truly forgive do not forget. Instead, they choose not to yield to the same destructive force that caused them so much suffering.”

This is what I find in the Indigenous People of Sacred Heart of the First People parish in Edmonton with whom I share the celebration every Sunday. They are living examples of this redemptive forgiveness, an invitation to memory and reconciliation.

Spirituality is not something private; the social dimension is constitutive of faith in the God of Jesus. Resurrection also has its communitarian dimension; it does not happen only at the individual level - we are called to rise together.

At this moment, in Canada, we can only walk towards that moment of life after death hand in hand with our First Nations brothers and sisters. They are our mentors and our guides.

The question is legitimate and important. Both in its history and in its present, the church has enough sin to legitimize the question. The list of sins done in the name of the church is long: the Inquisition, its support for slavery, its role in colonialism, its link to racism, its role in thwarting women’s rights, and its endless historical and present compromises with white supremacy, big money, and political power. Its critics are sometimes excessive and unbalanced, but, for the most part, the church is guilty as charged.

However, this guilt isn’t unique to the church. The same charges might be leveled against any of the countries in which we live. How can we stay in a country that has a history of racism, slavery, colonialism, genocide of some of its indigenous peoples, radical inequality between its rich and its poor, one that is callous to desperate refugees on its borders, and one within which millions of people hate each other? Isn’t it being rather selective morally to say that I am ashamed to be a Catholic (or a Christian) when the nations we live in share the same history and the same sins?

Still, since the church is supposed to be leaven for a society and not just a mirror of it, the question is valid. Why stay in the church? There are good apologetic answers on this, but, at the end of the day, for each of us, the answer has to be a personal one. Why do I stay in the church?

First, because the church is my mother tongue. It gave me the faith, taught me about God, gave me God’s word, taught me to pray, gave me the sacraments, showed me what virtue looks like, and put me in contact with some living saints. Moreover, despite all its shortcomings, it was for me authentic enough, altruistic enough, and pure enough to have the moral authority to ask me to entrust my soul to it, a trust I’ve not given any other communal entity. I’m very comfortable worshipping with other religions and sharing soul with non-believers, but in the church in which I was raised, I recognize home, my mother tongue.

Second, the church’s history is not univocal. I recognize its sins and openly acknowledge them, but that’s far from its full reality. The church is also the church of martyrs, of saints, of infinite generosity, and of millions of women and men with big, noble hearts who are my moral exemplars.  I stand in the darkness of its sins; but I also stand in the light of its grace, of all the good things it has done in history.

Finally, and most important, I stay in the church because the church is all we’ve got! There’s no other place to go. I identify with the ambivalent feeling that rushed through Peter when, just after hearing Jesus say something which had everyone else walk away from him, Peter was asked, “do you want to walk away too?” and he (speaking for all the disciples) replied: “We’d like to, but we have no place else to go. Besides we recognize that, despite everything, you still have the words of everlasting life.”

In essence, Peter is saying, “Jesus, we don’t get you, and what we get we often don’t like. But we know we’re better off not getting it with you than going any place else. Dark moments notwithstanding, you’re all we’ve got!”

The church is all we’ve got! Where else can we go?  Behind the expression, I am spiritual, but not religious (however sincerely uttered) lies either an invincible failure or a culpable reluctance to deal with the necessity of religious community, to deal with what Dorothy Day called “the asceticism of church life”. To say, I cannot or will not deal with an impure religious community is an escape, a self-serving exit, which at the end of the day is not very helpful, not least for the person saying it. Why? Because for compassion to be effective it needs to be collective, given the truth that what we dream alone remains a dream but what we dream with others can become a reality. I cannot see anything outside the church that can save this world.

There is no pure church anywhere for us to join, just as there is no pure country anywhere for us in which to live. This church, for all its checkered history and compromised present, is all we have. We need to own its faults since they are our faults. Its history is our history; its sin, our sin; and its family, our family – the only lasting family we’ve got.